Last week Ben and I celebrated our 5 year wedding anniversary! And I know 5 years is nothing to couples who’ve been married 15, 30, 50 years, etc., but it’s still something that makes me a little bit proud. And a lot of bit nostalgic. I mean, a lot can happen in 5 years. A lot has happened in 5 years.

Anyhow, I really wanted to do some sort of post in homage to this benchmark anniversary. But I couldn’t quite think of the right thing to write about. I didn’t want to be too preachy (heaven knows 5 years doesn’t give you all the right answers). I didn’t want to be too mushy. But I wanted it to be list-ish to fit into the 5 Things Friday mold. And what I came up with doesn’t fit in a concise title, at least not one that can work as the title of a blog post.

I decided on a list of Five Things That I Really Love About Ben That I Didn’t Realize Would Be So Awesome/Helpful When I Married Him. It’s partly mushy and partly advice-y and totally 100% things I’m grateful for in my husband. And I’m sorry in advance for the cheesiness. Well…sorry in a sorrynotsorry kind of way.

2. Ben is forgiving. Forgiveness is definitely not any sort of secret or new marital bliss tactic, but maybe it should get a little more attention in the world of marriage (who am I kidding? In the world, period.). Forgiveness is not something I’m good at. I have a really hard time forgiving. And then even when I say, “Oh, I forgive you” I still want to have an hour long discussion hashing out all the details of why whatever happened hurt me. I’m terrible. Ben is a great example to me. When he forgives (anyone! Not just me!) he seems to just forget about it. No hard feelings. No “Well, I forgive you, but I still want you to feel a little bad about what you did.” Nothing like that. Forgive and forget pure and simple. It’s definitely given me insights into how I can improve. Be more forgiving. Less guilt tripping. I’m working on it. Slowly. But for everyone’s sake, don’t make me mad. Just kidding, just kidding. Kind of.

3. Ben has an awesome family. And, well, this particular point, you could argue, has nothing to do with Ben! At least not directly! Hold your horses while I explain! Many years ago (before I was married, older and wiser), I had a friend who was dating a boy and things were getting serious. Getting married was a topic of discussion between them (exciting!) but, BUT his parents didn’t really care for her (what the!?). BUT, BUT clearly this wasn’t a real issue, right? I mean, you’re marrying him (we insisted), not his family, right? I mean, right???? WRONG! Sorry to be so direct but it is so obvious to me now that when you marry someone, you absolutely marry the whole fam! Whoever you marry is largely (I would say the majority) a product of the home in which he was raised. So…when your husband has a disturbing propensity toward potty humor, you can look a little ways past him to his sisters (again, what???) and see where it came from. Seriously, family can explain a lot about a person. But lucky for me, Ben’s family really is awesome and I’m super grateful for the relationships I’ve formed with them. When Ben and I were dating and I learned that he was the youngest AND the only boy, I had every reason to be nervous. But his family just enveloped me into their space and never looked back. What a blessing. Seriously. Well, besides the potty humor. But even then, I’ve mostly learned to tune it out. 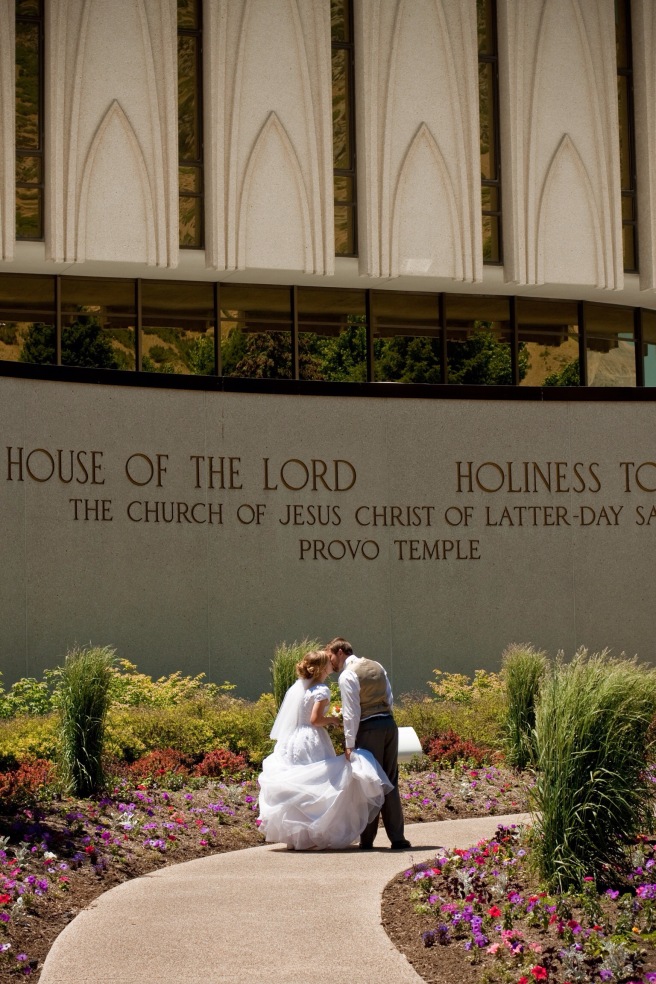 4. Ben has a strong testimony. Okay so this one kind of doesn’t really need explaining. But also, I’m a talkative word monster, so Imma just have at it. But I do feel the need to say that I think everyone has the potential to be a good spouse no matter what religion he/she associates with. But I also think that believing in something good will help any relationship. So, with Ben…we are members of the Church of Jesus Christ of Latter Day Saints. We are Christian. We believe that Christ lived a perfect life and in doing so, He was an example of a seemingly unending list of positive attributes: kindness, honesty, humility, love, patience, charity, and so on. As believers in Christ, we believe that these Christlike attributes are important for our own lives. Now, Ben has a strong testimony of our church and in Jesus Christ. This isn’t to say that he has perfected all of these attributes. Absolutely not. It is to say, however, that I know he finds these attributes not only important but worthwhile in obtaining. He believes in working toward being kind, honest, humble, loving, patient, charitable, etc. Ben believes in improvement. He believes in working toward a greater goal, in being a good person and becoming a better person. Again this isn’t to say that he’s improving at lightning speed and nearing perfection. Ben knows he’ll be chipping away at some of these Christlike attributes his whole life. Luckily,  he believes I live by the same rules. I don’t have to be perfect yet either.

And finally…5. Ben is adventurous. If you’re taking notes for your future spouse and marriage, this particular point is absolutely NOT necessary. I am positive many successful marriages have been comfortable and predictable. When I married Ben I had no idea that he had itchy feet that no amount of Gold Bond could cure. We moved to Idaho for Pete’s sake! But since then we’ve moved to places I never dreamed of going and have had experiences I never dreamed of experiencing. And, my gosh, it’s been fun. You certainly get to know a person when travel halfway around the world with them. And Ben is also very fun to travel with (he’s all “Let’s do it!!!” to my, “Should we? Is it worth it? What about the money???” Marriage. Balance, amiright?). All our adventures-the big cross continent ones and smaller takes less than a day ones-have helped us learn each other better, if that makes any sense. And, at least for me, they’ve helped me appreciate Ben better. I’ll tell you, nothing makes you appreciate your spouse more than being pregnant in the middle of nowhere and having him say, “Yes, dear, let’s spend the 9 dollars on the pint of Ben and Jerry’s.” But that’s a story for another time.

These past five years, they’ve been pretty darn good.