Ben and I are coming very close to finishing our time out here in the bush! We aren’t coming back to teach next school year because Ben is going to grad school!

He’s been accepted to Northern Arizona University and will be working towards a Masters of Arts in Teaching Spanish (phew! It’s a mouthful!). Not only that, but he has also been awarded an assistantship-so he’ll actually be teaching lower division Spanish classes on campus- and that comes with a tuition waiver and a small stipend.

This is actually the third time Ben has applied for grad school and everything fell into place so perfectly that we knew we had found the right match. We are STOKED to move to Flagstaff at the end of the summer!

Anyhow, this time we have spent living in the bush we have learned A LOT! I don’t know if we’ll ever come to live in bush Alaska again, but if we do, here are some things I’d change up as well as things I’d do exactly the same.

***Keep in mind that this is my very first bush experience and that I’ve only been out here for 5 months, which in no way makes me an expert! Also, not all of these things work for every person/lifestyle-if you’re here for tips, be sure to cater to your own likes 👍.

Don’t Pack Your Favorite Clothes- When packing for the bush, I was totally ready to bring out some of my favorite business casual clothes to look semi-professional in the work place. Ben set me on the right track and I totally swapped and just brought out some nice-ish casual clothes and I’m so glad I made the change! The water out here reacts differently when washing clothing so I’m glad I didn’t bring anything I’m super attached to (although, I’m sure putting that shirt through a few cycles of regularly plumbed water will get it back into shape). Also, I’m totally planning on throwing/giving away a handful of the shirts I brought out, which will free up some space on our return trip.

Also, the truth is that people really do not give a crap about looks out here. Fashion isn’t really a thing. I’ve met one person here in PIP who was totally trendy and cute, but overall, you’ll look professional enough if you’ve got clean clothes. Promise.

Plan Food (including quantities)-When we got going on doing our online shopping a week or two before flying out, as well as shopping in Anchorage for freeze and fresh, I was SO glad (SO SO SO glad!) that I’m kind of a freak and over plan everything and make crazy lists. Yes, that’s me. And it was incredibly helpful to not have to sit and figure out how many bags of flour we should have shipped, because I had already done the math and figured it out.

Do Your Research (then do some more…)- There is quite a bit of information on living in the bush-just know that every village is different. And time (even a short amount of time) can really change things for the bush.

Take Stuff to Do- As one might assume, the bush is not the most happening place you can live. Anyone who lives in the bush will find a whole new meaning to lazy weekends. At first I was like, “Wait…I don’t have work/deep cleaning/grocery shopping/other errands to attend to this weekend???” And I struggled. Then I kind of started loving it. Then I started hating it. It’s nice to lounge and sleep in…but at the same time you kinda wish you had something more going on. I did try to plan for the boredom (sewing, reading, blogging), but sometimes I did wish for a bit more variety.

Buy as Much as You Can Online- Pretty much anything we could buy online, we did. Anything from food to toiletries can just be bought online and shipped so that you can free up luggage space. I packed travel size toiletries and just knew that bigger versions would make it out to our house within a week or two of us arriving. We bought almost everything on Walmart.com because they do free shipping on orders over $50. I don’t love their packaging but their customer service really is super slick. If we let them know we hadn’t received something, they reshipped it within a day or two. Once I told them to just cancel an item and they refunded the money back into our account asap. We also bought stuff on Vitacost.com and their shipping to Alaska is a flat $9.95- but their packaging is so impressive that it’s absolutely worth it.

As Soon as You’re in the Bush, Start making a List for Your Next Online Purchase- And, well, this is pretty self explanatory. Just write down anything you realize you need and after your list gets big (in our case, when it was around $50 or more), we made an order. We made 3 big online orders while being out here (I think…) and stopped ordering things in early-mid April.

Budget for Extras- I’m totally a cheapskate, but I learned in China that sometimes it’s okay to spend money (imagine that!)! Sometimes you gotta spend some dough to get out of your routine, to try something new! It’s okay and it’s worth it. So. Go online and get yourself a new shirt, a new book, a new nail polish, anything to change things up. 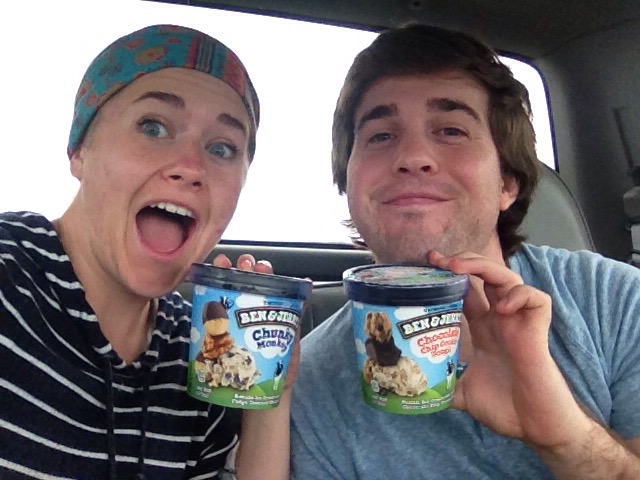 Ben and I love food…so when word got around that the store got a shipment of ice cream (ice cream, people!!!), you can bet your butt that we ran over there and got ourselves some Ben and Jerry’s even though one pint sized carton cost $8.50 😳😁 (that’s bush living for you, folks!). For the record: worth it.

Buy More Freeze Than You Think- Even with how crazy I was with planning our food, I did not foresee how much I wish we’d have stocked up on freezer foods. Pretty much, I miss fruits and veggies a lot. And while the frozen versions of these are not ideal, they are a far cry better than not having them. The diet out here in the bush is VERY meat and protein centered. When planning our meals, I basically just looked for options that would work with pantry staples (dry beans, rice and canned goods). Oh how I wish I’d incorporated more meals with less…protein! And for anyone who’s worried-Anchorage is very bush-life friendly. I think most hotels have large freezers for guests to store food in until they fly out. And the bigger bush airlines will also be able to keep frozen things frozen en route.

Buy Quick/Fun Dinner Options- Obviously, since lots of our meals are centered on beans and/or brown rice, we didn’t plan for many quick dinner options. But there are plenty occasions where we wish we had more of those. I mean, we could always make a quick tuna sandwich or bean burrito, but options are scarce out in the bush…unless you make them not scarce (?…Ha! Hopefully that makes sense). Also, we’ve hit occasional cravings for like Panda Express or Fiesta Ole (okay, that one’s just me…) and it would’ve been nice if I could’ve been like “Oh hey, remember, I bought some Kung Pao Chicken and Crab Rangoons at Costco!” And it will not be the same but it will be something :).

Buy Some Drink Mixes- Ha! This one’s totally probably just me…but the water out here…is…not the best…I mean, when it’s filtered it really isn’t bad. But I sometimes get sick of drinking it, which is saying something because I’ve always been a die-hard water lover. I wish I’d have brought or ordered some True Lemon drink mixes (yum and yum). But I didn’t and so I’ve been drinking lots more of what I did think to bring/what the last teacher who lived here left behind: tea, more tea, and suddenly Airborne is a drink of choice (whaaaa???…yeah…I know).

Take Some Movies- Ben and I are not big movie people. Even so, there were some weekends we were just like, “Man, I wish we had something to watch!” We downloaded a few times and then the Internet turned to crap…

Wait till You’re in the Bush to Buy Anything You’re Not Totally Sure You’ll Need- There were about five billion things I was ready to have shipped out to PIP (kitchen supplies, bedding, bathroom supplies), but Ben encouraged me to wait on most of it. I partly listened and partly didn’t. But I wish I had. Turns out most the stuff I was certain we needed, we totally didn’t. And anything we did need could’ve waited a few weeks after buying it online. Plus, if you wait, you’ll have a better idea for exactly what you need.

Think About the Seasons– I felt certain that I needed some leather/rubber duck boots for coming out here and Ben kept telling me to just get some Wellies (except, let’s be real-the man didn’t call them Wellies-he just called them rubber boots) and I stupidly  did not listen to him. When I got out here I realized that I’d only be out here for a little bit of winter (and winters in PIP are very mild compared to lots of other places in Alaska) and the boots I had chosen would soon be waaaaay too hot to wear regularly. Bad call, Kim. Truthfully, I should’ve followed the above suggestion and just ordered something when we got out here. Think all weather and think layers.

As usual, I’ve gone on for much longer than I intended…and I kept thinking of things to add to the list! Ha! But hopefully this’ll help out anyone who’s bush-bound (ourselves included…possibly…although probably not for at least 2 to 4 years…hello, grad school!) in the future!

3 thoughts on “Same and Different: If The Browns do the Bush Again”