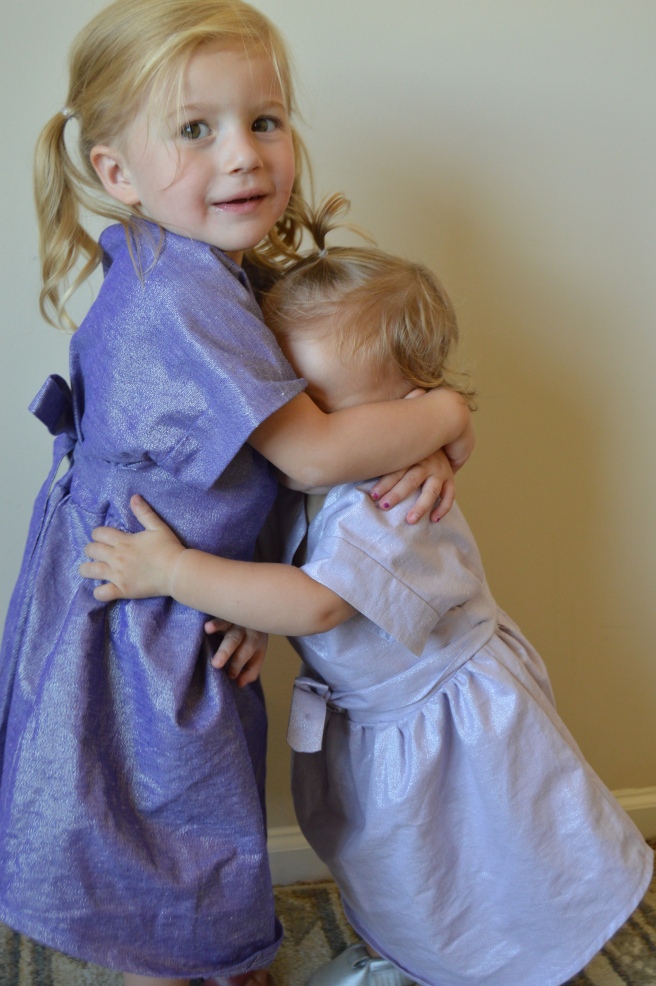 This was actually the very first indie pattern I bought! Finally made it in August and am just now getting around to posting about it! Ha! Maybe someday I’ll get on a more seasonally appropriate making and posting schedule but don’t anybody hold your breath! Ben gifted the women’s pattern to me for Christmas and then shortly after, Chalk and Notch released the little girl version of the very same dress and of course I had to get that one too! If you haven’t caught on, I am into twinning, although, turns out, I am still learning where my limits are in the matchy-matchy department. 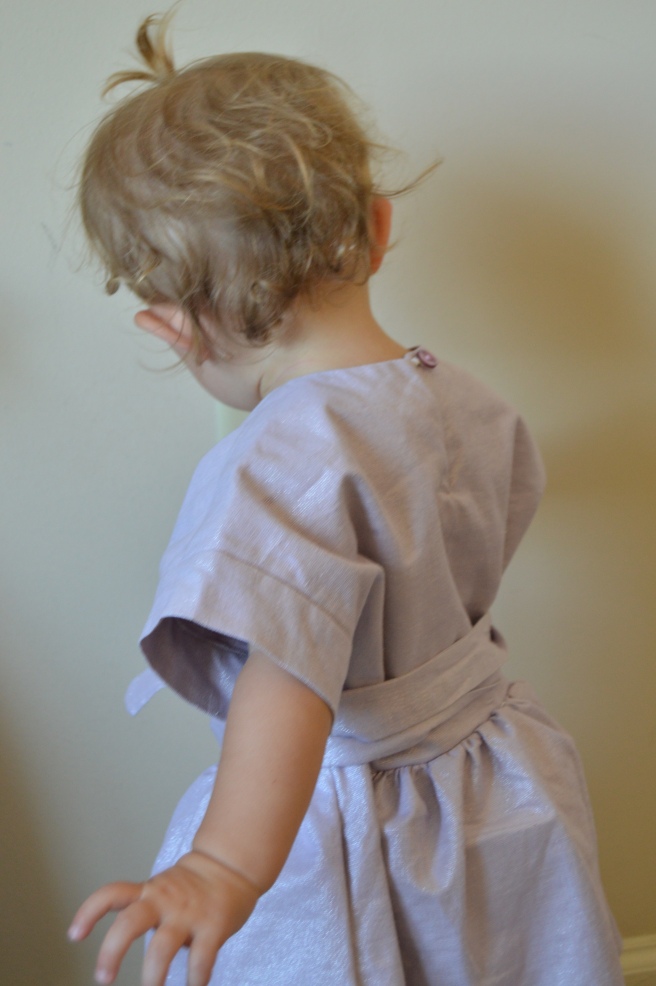 Since turning my focus more toward garment sewing, I’ve realized that my wardrobe is pretty blah-mostly grays and navy blues. This is a bit of a sad thing because I love color. But turns out sewing your own clothes is a great gateway to getting clothes to be exactly how you want them to be-which includes the color you want them to be too. It can be pretty awesome assuming you know where to get your hands on good (and good colored) fabric. So in trying to brainstorm what fabric to use in our twinning dresses, I eventually landed on metallic linen. I thought it would be perfect. Finding it, though, was very difficult. Even if an online store had metallic linen in stock, it definitely didn’t have three different colors that all coordinated. So I just decided to keep my eye out for it.

A few months later, I went into Joann Fabric with my mom. We turned the corner and BAM! there was a rainbow array of metallic cotton/linen blends! They had at least 10 different colors in stock! I had my girls choose their colors and went with aqua for myself. Now, the fabric itself is gorgeous (it’s in the quilting fabric section btw, if anyone’s interested), but I may have gone a little too far off the deep end going from grays to an actual color that also happens to be sparkly. I do like the look of the dresses but I’m not sure I’m there yet with something so eye-catching. I’ve only worn my dress once but I could definitely see me wearing it more in the spring or summer. Time will tell.

My girls, however, love their dresses. Wendy asks to wear hers to church so regularly that I have to tell her no, because she wore it last week. Wendy’s is, incidentally, the most obviously metallic (i.e. it’s very shiny), but that doesn’t stop her from loving it. As far as alterations go on the girls’ dresses, I just shortened the skirts about an inch and a half on each. I should have shortened Greta’s bodice as well (we short!), but it works regardless (kids are not picky in the fit department, which is very nice!).

As far as adjustments for my dress go, I didn’t do a whole lot. I brought the dart apex in about an inch. And I made my waist ties longer, and wider (especially at the end) because I wanted to tie them in the front and have the ties be more of a feature rather than just a shaper (there I go, making up terms). As I’ve been told by many acquaintances, I am short (5′ 3″…and a half!) but I didn’t alter the length in any way, because the low-hem-in-the-front-and-high-hem-at-the-sides feature is pretty dramatic and I didn’t want those side hems to be too short. 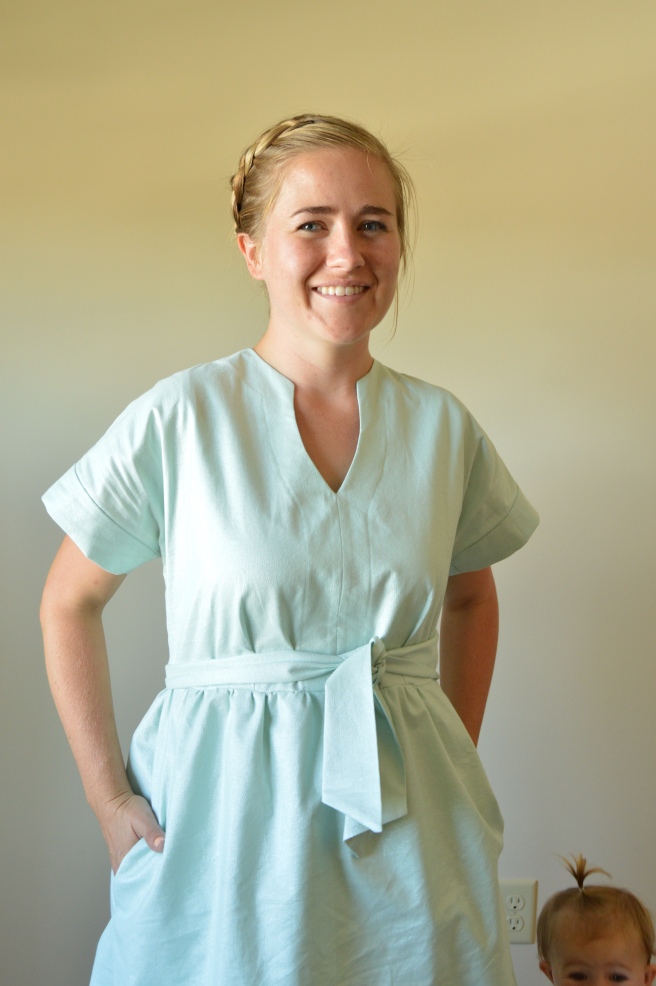 So. Overall. Let me just say that the more patterns I come across and the more independent pattern designers I try out, the more I see what kinds of patterns perks there are. And honestly, Chalk and Notch is 100% awesome in their patterns. Seriously, they are drafted beautifully and have amazing instructions and illustrations. As in, as a relatively new garment sewist, there was no point in making the pattern where I was like, “Whaaaaaat am I supposed to do???” Everything is super clear and doable. In addition to a great pattern, some bonus material is that the pattern includes layered printing (you can print only the size(s) you need, and a basic instruction sheet (for more skilled sewists who don’t need a play by play). Really, the patterns (both the womens’ and the childrens) are great patterns.

Having said that, I don’t think I made the best choices to really make this particular pattern one that I’m super eager to sew again. I mean, someday I think I will give it another sew but I think I’d like to make a couple changes. First, I’d want to try out a bit drapier fabric. I’d also like to drop the side hem an inch or two so that the curved hem isn’t quite so dramatic. The pattern offers another view which includes buttons and I’d love to try that ones out. I’ve also seen some cute hacks to this pattern and I’d be interested in trying to tweak some things to make a different look.

These dresses do have pockets, though, and that is always a win!

I feel like maybe I’m leaving things a little unclear, so let me just sum things up: This pattern is awesome. I really do like how these dresses turned out, but so far mine hasn’t been something I reach for again and again, although, I think with a few changes, it could be.

One thought on “Mommy and Me Matching Dresses: The Fringe Dress”